As historic site guides and interpreters we not only tell stories to our wonderful visitors but show them the “stuff’ of the past, as well. Here is a technique that I was recently enthusiastically encouraged to share.

“This is my favorite object” usually gets visitors’ attention. I suggest that you share your favorite object with our guests. Like many of you, I have one; mine is located in (Well, since I am the new kid on the block who has not seen everything quite yet I’ll call it my current favorite object.) the Penn’s bed chamber: the wig stand, (It turns out it is not part of our permanent holdings but from a New York collector). This object immediately struck me as a fine example of the turner’s art. Our stand is 31 3/4 inchestall, graceful and appears to be made from a soft wood. It is painted black possibly to imitate mahogany or ebony, thus giving it a sense of elegance. Keep in mind that tastes for the exotic increased as Europeans began colonization. Access to new materials provided artisans outlets for creativity and customers with new goods.

Formal portraits show us that in late-seventeenth century Europe men were wearing their hair long. By the era of the American Revolution hair had become shorter. (Another article may appear talking in general terms about changes in fashion during the Penns’ era.) Wigs were popular in both periods. Male fashions were set by royalty.  Monarchs had expectations for visitors’ appearance. They seemed to have wanted to control the 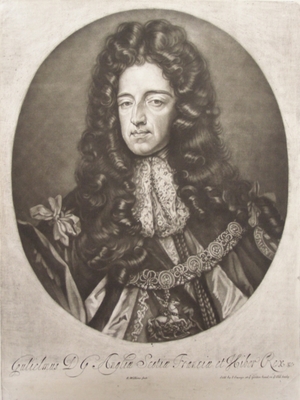 pleasing visual aspect of life at court. During William Penn’s time men were encouraged to wear luxurious wigs; quite long wigs became the fad. Some extended below shoulder-length. [The wig that our stand could support would reach my waistband!] As an example, take a look at the King’s portrait in the Great Hall. Co-incidentally, Charles II and William Penn were balding. As a small child Penn contracted smallpox and was left with partial hair loss.

As Philadelphia developed at a very rapid pace, many tradesman and artisans set up shop to take advantage of the growth. The city soon acquired a wood turner (who was also a saddler) named Henry Furnis who set up shop in one of the caves along the river. Penn wanted folks out of them – and quick! We have correspondence between Penn and Furnis in which we see

that the shopkeeper was offered rental space owned by the proprietor. Mr. Furnis felt this to be an inconvenience because he needed to be near woodlands to acquire materials for his trade. Think about the last time you saw a wig stand. Likely it was made of plastic or Styrofoam – and NOT turned! My how times have changed…

You can now see that we can use objects to make deeper connections to the past for visitors. With a simple wig stand we can tell the story of changes in fashion, expanding empires, and even employment among tradesmen. Oh, and shopping! Hhhmmm, do you think we should offer wig stands in our Gift Shop?